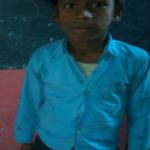 When the special training teachers of GHS Karsan went around Ramdarbar colony to conduct a Survey of the out of school children, they found some children playing in the park. The Teachers asked them if they all are studying in any school. All of them replied in positive but only one child out of them said “no”. By asking him the reason for not going to school, he told that he has no time for school as he is a domestic worker. The teachers asked him about his family and met his maternal grandmother and his mother. This child whose name was Gourav had recently shifted along with his siblings and his mother from a rural area in Haryana. As told by his grandmother, the mother of this child was tortured by her husband and his family. As she had no source of income to support her family, the child was not sent to school and became a domestic worker. He was a dropout child.

The Teachers motivated her to send Gourav to  nearby school. But she denied by saying that she has no money to pay fees and other facilities. Then teacher apprised her of free facilities being provided by government and her child will get free education, free food, free books and free uniform. She allowed her son to be admitted in school so that he can grow up to be a good man, a responsible citizen.

After assessment of Gourav by assessment tools developed by SSA UT Chandigarh, he was enrolled in special training center and the teachers started his basic and fundamental Special Training according to his level with the help of condensed material, Teaching Learning material and worksheets.

With continuous efforts of teachers, Gourav has achieved his level of competency  and now he is preparing for class 7 (Level-III)