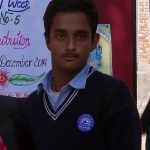 Karan born on 05th November 1997, at a Government Hospital in Chandigarh is hearing impaired. His mother Shyamadevi and father Omashankar have 3 children. He is the eldest son and born to a financially weak family. He suffered from severe jaundice after birth for about 15 days. After a few months it was observed that all his growth milestones were delayed. He started walking at the age of three and it was seen that he was unable to respond verbally and also did not respond to any source of sound. He suffered from severe ear infection for a long time.

He reported for testing at the age of 3 to an ENT specialist and had to go through a surgery. After some time his parents got him an audiology test done where he was diagnosed as Profound Sensory neural hearing loss with 105 db in the right ear and Moderate Sensory neural hearing loss with 68db in his left ear.  On account of his deafness and delayed speech and language, his parents were hesitant to send him to school because mostly he was rejected for admissions by them.

The mother along with her child came to Chandigarh in 2008, to his father who was already working here, with the purpose of his treatment and education. Karan was identified, as hearing impaired child in 2009 during the survey of identification of special needs children at community level.  He was admitted to STC thereafter and within the period of one year he was mainstreamed.

When resource teachers visited him in class 3rd, they noticed a physically weak child who sat very quietly and alone in back row seat. The class teacher reported that Karan seemed different than other children and is mostly unresponsive as he could not follow the verbal instructions moreover he could not walk independently. He neither took part in any class room activity nor he want to mix up or play with other children. The child used to communicate with his peer group by using sign. But the child could copy the words from blackboard.