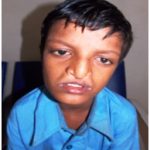 Mohammed Vali, aged 11 years was born mentally disabled with Speech Impairment. He was having speech problem, poor academic skills, behavioral problems and personal skills. He was not able to understand the instructions. He had poor eye -hand co-ordination, could not identify things and was hyperactive, poor concentration, attention, speech, language, had poor linguistic skills and programme skills like lack of eye contact, attention, concentration, receptive and expressive skills, and poor speech skills. The boy did not mingle with any of his peer group. He used one word for his requirements which were not clear and only by gestures he got what he needed.

He was admitted into NRSTC for SRP Programme. There,  methods and techniques were used by the Resource Teacher in improving the child. In the beginning,  he always felt uncomfortable and wanted to leave the classroom, couple of times he ran away from Bhavitha centre. Later the Resource Teacher assessed the child and prepared need based goals to develop his skills periodically.

After undergoing Self help skills; Communication and Social skills; Speech therapy; and Functional Academics at Bhavitha Centre in Dhone of Kurnool district; there has been considerable improvement in Mohammed Vali.

The child now understands and follows instruction, has developed good habits, and his social skills have improved. Now he understands what the teacher or his parents say. He is able to speak two or three letter words. He is able to express the name of animals and vehicles.

The child has been mainstreamed in MPPS School in Kondapeta, Dhone. The feedback of the teacher in the school is good. Now he is communicating with the other children in the school.