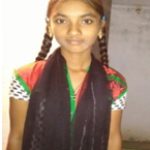 Vullapalli Rani studying in VIII class, MPUP School Kothagraharam, Nandigam Mandal enjoyed the atmosphere of the school and desired to have the same atmosphere in her house also. Then she insisted her parents to construct a toilet. But, the parents rejected the idea initially. Meanwhile the parents planned to buy a colour TV. Then this girl explained them that the TV can be useful only for entertainment and information. Instead, if we construct a toilet in our house, we can have privacy and keep our surroundings clean, and it also protects us from diseases and it also prevents open defecation.

In this way the little girl convinced the parents and finally got them to construct a toilet in their house.

After some time, their neighbors held discussions with the girl and the parents. She convinced and inspired all the neighbors. Soon they also realized the benefits and importance of having toilets and decided to construct toilets in their houses duly utilizing the government schemes. In no time, most of the families in the street have constructed toilets and going towards achieving the objective of Swachh Bharat Mission. Continuing the process, not only in the street, the entire village got inspired by this action and now most of the families have constructed toilets in their houses.