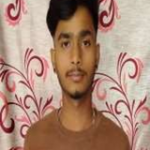 Shyam was a never enrolled child. His family was migrated from Uttar Pradesh to Chandigarh. They lived in Adarsh Colony Sector 54. He has one sister and one brother. The economic conditions of the family was not good. His father was a labourer and his mother was a house wife. Education was not important for their family. He and his brother roaming around in street.

I traced him on OoSC survey. But his family was not agreed to send him school. I visited his home two and three time. I was counselling them. I introduced them about facilities given to the students like no fees, free books, free uniform, free stationary, facility of mid day meal, no harassment during admission and also get SC scholarship. I told them that we also arranged educational trip for students at free of cost. At last parents were agree to send him school. I enrolled him in third class in 2011.

But shyam never adjust himself in school atmosphere. In starting, he was absent and I again visited their colony to bring him in the school. He never took any interest in study. He never completed his home assignment which was given by me. According to him education was not important. But slowly due to teacher’s effort, attention, love and care he understood the value of education. After 6 month of teacher’s struggle he became a sincere boy. He gave his best to his study and he wanted to achieve some place.

Nothing is impossible this fact proves shyam by his hardwork. Due to his hardwork he completed his matriculation examination. According to his parents his education had completed. They wanted that he did any job to earn money. They had not enough money to continue his education so they did not favour his education. But Shyam wanted to achieve some place. So he decided to do part time job to continue his study. His parents had no objection on his decision. So to earn money sometimes he became a waiter, a hawker or a delivery boy. His life is full of struggle but he never loose his patience.

In this year with great vigour and enthusiasm he completed his secondary examination. He became a role model for their cousins, friends and neighbours. Now he applied for ITI vocational course in computer and he wants to become a software engineer. God fulfil his all ambitious

In this year he applies in ITI vocational courseTestimonial_Shyam